Opened in 1910 as a combination dance hall and skating rink, the Arcadia Ballroom, situated along the west side of Broadway just north of Montrose Avenue, was one of the Uptown district‘s best known entertainment destinations. During the 1920s, the ballroom became one of the city’s most popular dance establishments and stood as one of the few places in the city where white audiences regularly danced to the music of all-black jazz bands. The driving force behind the Arcadia’s popularity, particularly during the late 1910s and 1920s, was sports and dance promoter Paddy Harmon, whose interests included the Dreamland Ballroom and Chicago Stadium on the near west side. 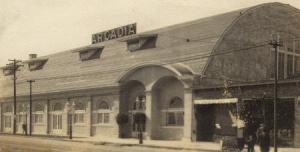 At a time when most of the city’s ballroom managers drew a strict color line in the hiring of bands to entertain their predominantly white patrons, Harmon willingly hired all-black jazz bands from the south side to play at the Arcadia. This made the ballroom one of only a handful of north side venues, the Green Mill Gardens being another, where white audiences regularly danced to the tunes of black jazz bands. Between 1925 and 1927, Charles Elgar and his Orchestra headlined at the Arcadia. They were followed by Walter Barnes and his Royal Creolians, better known for their performances at Al Capone’s Cotton Club in Cicero, Illinois, who played the Arcadia during 1928 and 1929.

The less orchestrated style of the black jazz bands appealed to younger dancers in search of new ways to express themselves and meet persons of the opposite sex. Nothing determined the respect and admiration of fellow dancers at the ballroom, one observer noted in 1925, than “the ability to twinkle an eccentric toe. Much of the dancing is individualistic, done in the corners where the stag line converge with the young frails. When the individual dance style pleases one of the opposite sex a team is formed, and they venture out on the main floor. Everybody seems intent upon drawing the limelight in their direction. Fashions in stepping are exceedingly versatile and varied.” Indeed, their inventive power was remarkable. Every night, the ballroom’s so-called “shieks” and “shebas” staged impromptu dance contests in which the sheer originality of your dance steps won you the acclaim and respect of your peers. In the process, they did much to popularize jazz music and lay the groundwork for the big band dance craze of the 1930s. On other nights, the dance floor was turned over to roller skaters, who wheeled about to many of the same jazz tunes.

During the late 1920s, the popularity of the Arcadia as a dance venue declined. The opening of the nearby Aragon Ballroom in 1926 drew away many of the Arcadia’s patrons and the hiring of black jazz bands only partially offset the loss. Regular dances at the Arcadia ended shortly after Walter Barnes and his Royal Creolians concluded their stint at the ballroom in 1929.  Thereafter, sports events became more common at the Arcadia, which, after 1933, was known as the Arcadia Gardens.

Between 1933 and 1936, the Arcadia had a brief stint as a boxing venue.  The most noteworthy bout at the Arcadia took place in 1934, when a still relatively unknown Joe Louis won three bouts, two by knockout, on his way to claiming the world heavyweight boxing championship.  Then, in 1936, the building’s owners, looking to cash in on the growing popularity of roller skating, converted the Arcadia into a roller rink.  It continued to operate as a roller rink through the next two decades.  During the late 1950s, the Chicago Westerners of the women’s professional roller derby league played some of their home matches at the Arcadia Gardens.

In the early morning hours of Sunday, January 4, 1959, an extra-alarm fire destroyed the building.