The enormous and extravagantly decorated Aragon Ballroom opened in 1926 in the heart of Chicago’s booming Uptown district. The Aragon’s owner, Andrew Karzas, designed the ballroom to silence those who criticized the city’s commonplace dance halls as unhealthy, immoral venues for the seduction of women, the practice of prostitution, and the then-illegal distribution of alcohol. With its stylish interior decor, its courteous but watchful staff, and its strict policies against any alcohol consumption, the Aragon was intended to impress critics and convince them that public dancing need not always be considered a bad thing. As much as such policies helped win the patronage middle-class youths, the regular booking of the nation’s top jazz bands was equally important in helping the ballroom attract huge crowds on a nightly basis.

Uptown’s Aragon Ballroom was built by brothers Andrew and William Karzas, who had made their early fortunes in nickelodeons and movie theaters. Recognizing the growing popularity of public dancing during the early 1920s, they opened the famous and elaborately decorated Trianon Ballroom on Chicago’s South Side in 1922. In contrast to many of the city’s earlier dance halls, the ballroom’s elegance, spaciousness, slower-paced music, and eagle-eyed chaperones lent it an air of respectability that attracted huge crowds. 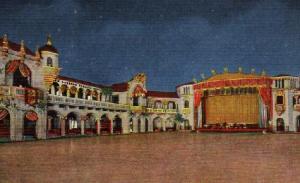 With high hopes of duplicating the success of the Trianon, the Karzas Brothers opened the Aragon on 15 July 1926. Thousands of eager dancers, including former Mayor “Big Bill” Thompson, attended the opening event. Many were astounded by the ballroom’s extravagant interior design. The second-level dance floor was reached by a thickly carpeted grand staircase guarded by large plaster dragons.

Once upstairs, patrons entered another world. The ballroom was designed to resemble the courtyard of a Moorish castle. Palm trees and twinkling lights in the ceiling were added to give dancers the feeling they were spending the night under a clear, Spanish sky. Built to hold nearly 8,000 people, the all-maple dance floor rode a cushion of cork, felt, and springs that vibrated to the music of the Aragon’s bands, including those of the ballroom’s most regular bandleaders: Freddy Martin, Wayne King, and Dick Jurgens.

Huge crowds flocked to the Aragon, including many out-of-towners who listened to the ballroom’s music six nights a week over radio station WGN from 10:05 p.m. until 11:00 p.m. Weekly attendance regularly topped 18,000 during the ’20s, ’30s, and ’40s. Much of this success lay, as it had at the Trianon, in management’s ability to maintain high standards of conduct among patrons. Men were obligated to wear jackets and ties, women semi-formal evening wear. Smoking was prohibited on the second level. And tuxedoed floorwalkers prevented close dancing or jitterbugging. The Aragon’s elegance and orderliness contrasted sharply with the more youthful and trendy atmosphere at the neighborhood’s other major dance hall, the Arcadia Ballroom.

The ballroom’s close proximity to public transportation—the ‘L’ ran along the west wall of the building—was also a key factor in its ability to attract large crowds from across not just the North Side, but all of Chicago.

Regular dance schedules at the Aragon ended 9 February 1964, after several years of sagging attendance. The enormous ballroom simply could not compete against the rise of television, the younger generation’s concentration on family-building, and the decline of the Uptown neighborhood. Since then, the Aragon has hosted a wide variety of events, including wrestling matches, roller skating, rock concerts, and even a couple of disco nights. Today, it is used primarily for concerts and occasional dances.